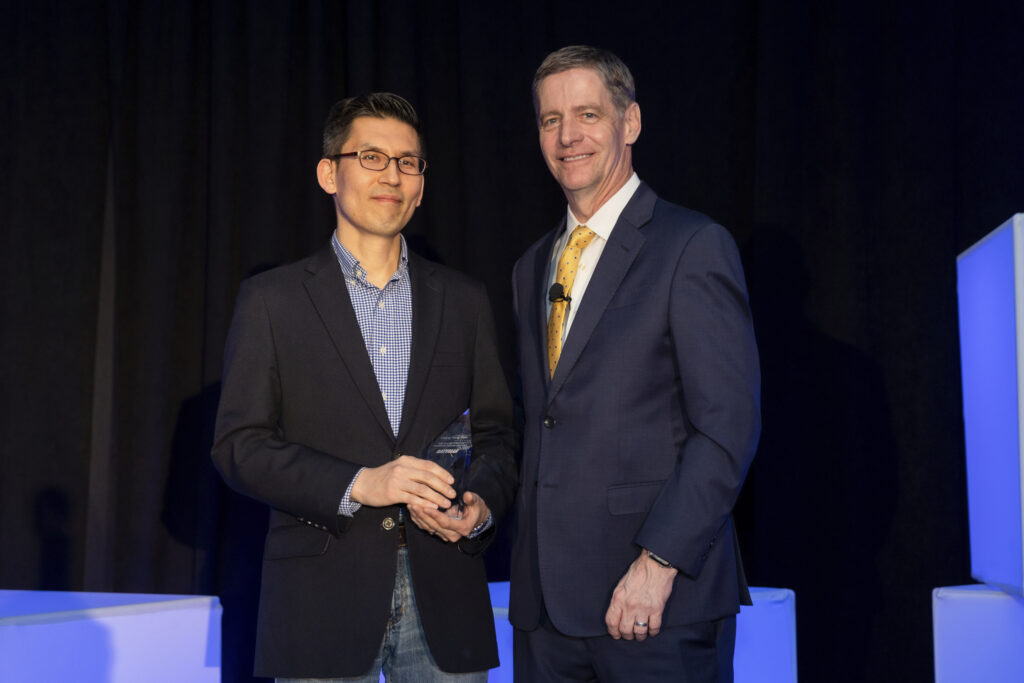 
UPTON, NY—Materials scientist Chang-Yong Nam of the Center for Functional Nanomaterials (CFN)—a U.S. Department of Energy (DOE) Office of Science User Facility at DOE’s Brookhaven National Laboratory—has been recognized as an “Inventor of the Year” the global science and technology organization Battelle. Battelle manages Brookhaven Lab on behalf of the DOE through Brookhaven Science Associates, a partnership with Stony Brook University. The annual inventor awards recognize individuals who have made significant scientific or engineering contributions with important societal or financial impacts.

As a member of the Electronic Nanomaterials Group at CFN, Nam leads a research program centered around using atomic layer deposition, a high-precision material coating technique, to develop new materials and functionalities for micro/nanoelectronics and energy applications. His innovative approach to the development and application of these new materials is evident in the recent discoveries he has made.

Always thinking ahead, Nam imagines how his work will be used to influence real-world applications. “I'm not really focusing on applications per se, I'm still approaching these concepts from a more fundamental perspective, but I care very deeply about what will eventually happen to the fundamental discovery. I tend to think about whether this work could be useful or meaningful in addressing critical, technological issues that society is currently facing,” he said.

“Because we are making a hybrid, compared to a purely organic or inorganic material, we are creating new, drastically different properties—chemical, mechanical, optical, electrical, you name it! Vapor-phase infiltration is still a fairly new approach, and there are so many potential hybrid materials that have yet to be discovered with properties and functionalities we’ve never seen before. It’s a really nice field to dig into,” Nam said. “After we explore these unique properties, then we can start thinking about how to apply them.”

One particularly exciting application is in the quickly evolving field of microelectronics—wherein semiconductor components, such as microchips, transistors, and semiconductors, are manufactured on an extremely small scale, typically in single-digit nanometers (or billionths of a meter). “The continued downscaling of such semiconductor components is critical to meet the demand for improved performance in electronic devices, like smartphones and computers, that are only getting smaller,” Nam explained. “On a larger scale, the nanoscale components aim to address energy efficiency issues in electronic devices that are expected to become unsustainable in the next decade if they aren’t mitigated new technologies.”

Creating these tiny semiconductor components and associated circuits is a meticulous, time-consuming process. Using light, scientists etch complex, nanoscale patterns into silicon wafers, known as substrates. But they don’t etch directly. First, they coat the silicon substrate with a photoresist—a material that is sensitive to light, typically extreme-ultraviolet (EUV) light. They then shine the light through a photomask. The photoresist areas that aren’t blocked the mask will dissolve following “development”—a process similar to developing photographic film. This leaves behind a photoresist pattern that can be transferred to the underlying semiconductor substrate to create electronic components like transistors.

Photoresists made from purely organic materials, like polymers, need relatively long EUV light exposure, due to their lower sensitivity, and can easily degrade during the etching process. These conventional materials also require a complex, costly chemical synthesis process to increase their sensitivity and strength.

In searching for a way to improve the process, Nam and his team combined inorganic elements with an existing organic EUV photoresist, using vapor-phase infiltration, to create new organic-inorganic hybrid EUV photoresists without complex chemical synthesis. By combining the properties of these organic and inorganic materials, the resulting photoresist is much stronger and has a higher sensitivity to EUV light. This breakthrough allows for faster production of nanoscale semiconductor components with higher resolution at a lower cost.

Nam’s invention received recognition at a DOE competition judged specialists in the field. The event provided the team reassurance that they were onto something big. “This was a nice highlight, the recognition of the judges, who were real investors volunteering for this event,” he recalled.

Industry leaders have already expressed interest in this approach to synthesizing high-resolution EUV resists. “Of course, we need a little bit more improvement to be able to get into actual commercial application,” Nam remarked, “but I think we have a much better idea of what to do.”

Chang-Yong Nam has also developed a new hybrid material with record-setting mechanical resilience as well as materials with enhanced properties for gas sensing, photodetectors, photo-catalytic water splitting, and solar cells. His eagerness to adapt to the everchanging landscape of his field is evident in his work. Along with over 100 published scientific journal articles, he has generated nine patent applications, six records of invention (ROI), and a U.S. patent for methods of nanowire synthesis. Nam has also recently developed hybrid materials for analog resistive switching devices, which can be used as the core components for computers that mimic the information-processing capabilities of the brain (U.S. provisional patent application).

“These technological challenges are a gateway to learning about new science. I'm not just excited about one particular technology; I constantly try to see the big picture and I can see where we have to move, what I can contribute, and what I need to learn,” he said.

Brookhaven National Laboratory is supported the Office of Science of the U.S. Department of Energy. The Office of Science is the single largest supporter of basic research in the physical sciences in the United States and is working to address some of the most pressing challenges of our time. For more information, visit science.energy.gov.

Donate with your life

Save your Shopping with Coupons

Shop, Save & Do Good